I read a book recently called The 7 Keys To Being A Great Coach, by Allistair McCaw. It’s an easy read, and although it doesn’t really contain anything new (I suspect Allistair, like most good coaches, is something of a magpie), it does lay out a cohesive plan for how he feels you can be a better (sporting) coach.

One of the suggestions is to structure your day more rigidly (more on this in a future post), including dedicating time early each morning for your own fitness and wellbeing.  The suggestion is that, rather like the advice you receive during the in-flight safety announcements on an aircraft, you “fit your own oxygen mask before helping someone with theirs”. Meaning, look after yourself first otherwise you’ll be in no fit state to help someone else.

I like this advice. It feels intuitively correct, but it has other ancillary benefits beyond simply being in better physical shape. We know that there’s a link between physical activity and mental health as exercise stimulates the generation of endorphins, dopamine, serotonin and norepinephrine within the brain. Exercise helps you look good (hopefully) and feel good. It also helps me set up my daily routine.

And so I decided to embrace the early morning workout fully. I’ve been recovering from torn ankle ligaments (from about 9 months ago now), so I knew I’d have to work on getting my fitness back ahead of the upcoming hockey season. I was nervous that I’d struggle to run like I used to, but it turned out not to be too bad. It also helped that it was sunny when I woke up each day (whilst we enjoy this late burst of summer).

I decided I would go for a run each morning, particularly whilst I was feeling inspired to make several changes to my lifestyle aimed at making me more productive and content. Each run was somewhere between 5km and 10km in length, and required me not only to find the time to do the run, but also to cool down properly afterwards. I’ve found as I get older that my core body temperature stays elevated for much longer after exercise, meaning I continue sweating for up to 30 minutes after I’ve finished. Cold showers helped shorten that, but there’s a sort of puritanical self-flagellation there that I found a bit too much each day.

But I made it work. I bounced out of bed nice and early (usually without waking up Mrs Wolfe) and managed to get my run in before work each day. I felt good. Virtuous even. The weather continued to be good and I more or less managed to make it a habit each day. My 10k daily steps were easily nailed well before lunchtime. I got quicker again (back to my pre-injury times) and found it easier. Right up to the point where it wasn’t.

At some point I found I was less inspired to jump out of bed and get running. The weather was still good, but I wasn’t making quite the same progress in my times. And my ankle hurt a bit after 15 consecutive days or so. It was also feeling a bit monotonous. So I gave myself permission to miss a day. And that was it. Suddenly the streak was broken and I found it easy to forgive myself for not running every day.

You might think that what should have happened next was that I shrugged my shoulders, resolved to start again and then run every day for the next 5 years. But what I actually did was I gave myself permission to just run when I wanted to. I still go out every 2-3 days, but it doesn’t feel so much like a chore. I’ve always sort of enjoyed the 25-45 minutes I had by myself whilst running, but suddenly that time alone with my thoughts seemed even better. I guess I’d fallen into the trap of taking something I’d enjoyed and making into a form of punishment (at least in my head).

So what I’ve done is extend the concept of investing in myself and allowed it to include taking time off if I feel like it. Maybe I’m not pushing my aerobic fitness as hard as I could. Almost certainly I could still do with losing a few pounds. But my ankle is thanking me, and my desire to continue hasn’t been destroyed in the process.

Somewhere in my conservatory is buried various bits of gym equipment. I will see if I can unearth that and use it to provide a bit of variation in my exercise. Especially when the weather outside is grim. I think I’ll also try to do the odd session in the evening rather than just in the morning.

For someone who can get bored pretty easily (I would probably have been diagnosed with something like ADHD nowadays), it’s nice to vary things and give myself a chance to be happy with what I have achieved rather than mentally punishing myself for what I haven’t. 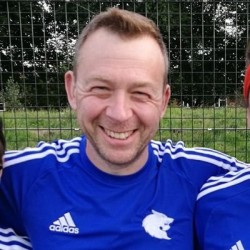